The September Job Numbers are out and the trends are disturbing.  Millions upon millions of Americans are now wondering how they are going to safeguard the health and welfare of their families and property.  As these people lose their “money” they become increasingly invisible, powerless, and marginalized – except for one single, solitary, beacon of earthly influence.  Social Media.

Now, more than ever, we need to implement an alternate economy with an alternate currency.  I am not pitching some “anti-dollar-therefore-anti-American” platform, I am talking about what the hell will millions of unemployed people and their families do if they don’t have a functional currency they can trade for basic needs and services.

These same people have tons of practical experience, diverse knowledge, and worthy intellect – but no money?  It makes absolutely no sense that “productivity” should become so divorced from the value of a solitary currency.

We must come to the immediate conclusion that social media can be a fabric that binds the American economy.  If done correctly, Social Media can become the basis of an economy that rewards social priorities over Wall Street Priorities.  But ONLY if done correctly.

While the institutions around us falter, social media will increasingly duplicate – for all practical purposes – the functions of these institutions in our society.  As this transition takes place, we must lead social media in specific and intentional directions.  This cannot be a “traditional” market driven process – the market is what we’re trying to correct.  This cannot be a random process or else it will become reactionary and feed on itself.  Instead, Social Media needs to be organized in a manner that allows information, knowledge, and innovation – the basis of human productivity – to trade like a financial instrument.

Everyone must have a productive role in the next economic paradigm – employed, unemployed, communities, traditional media, even existing corporations and their advertising departments.  All of the existing infrastructure is in place – it only needs to be rearranged a little bit.  That is what The Ingenesist Project hopes to initiate.  We may not be 100% correct and the process that actually arises may be substantially different, but we need to start somewhere.

Meanwhile, here are the Jobs stats for September; 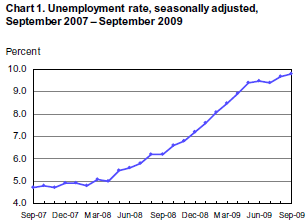 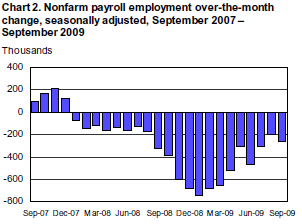 That’s not good – there goes the “second derivative” argument. Weekly earnings are also down by $1.54, which is bad news too. But the Household Data is VASTLY worse than reported. Here are the month-over-month changes, and they’re in the realm of frightening.